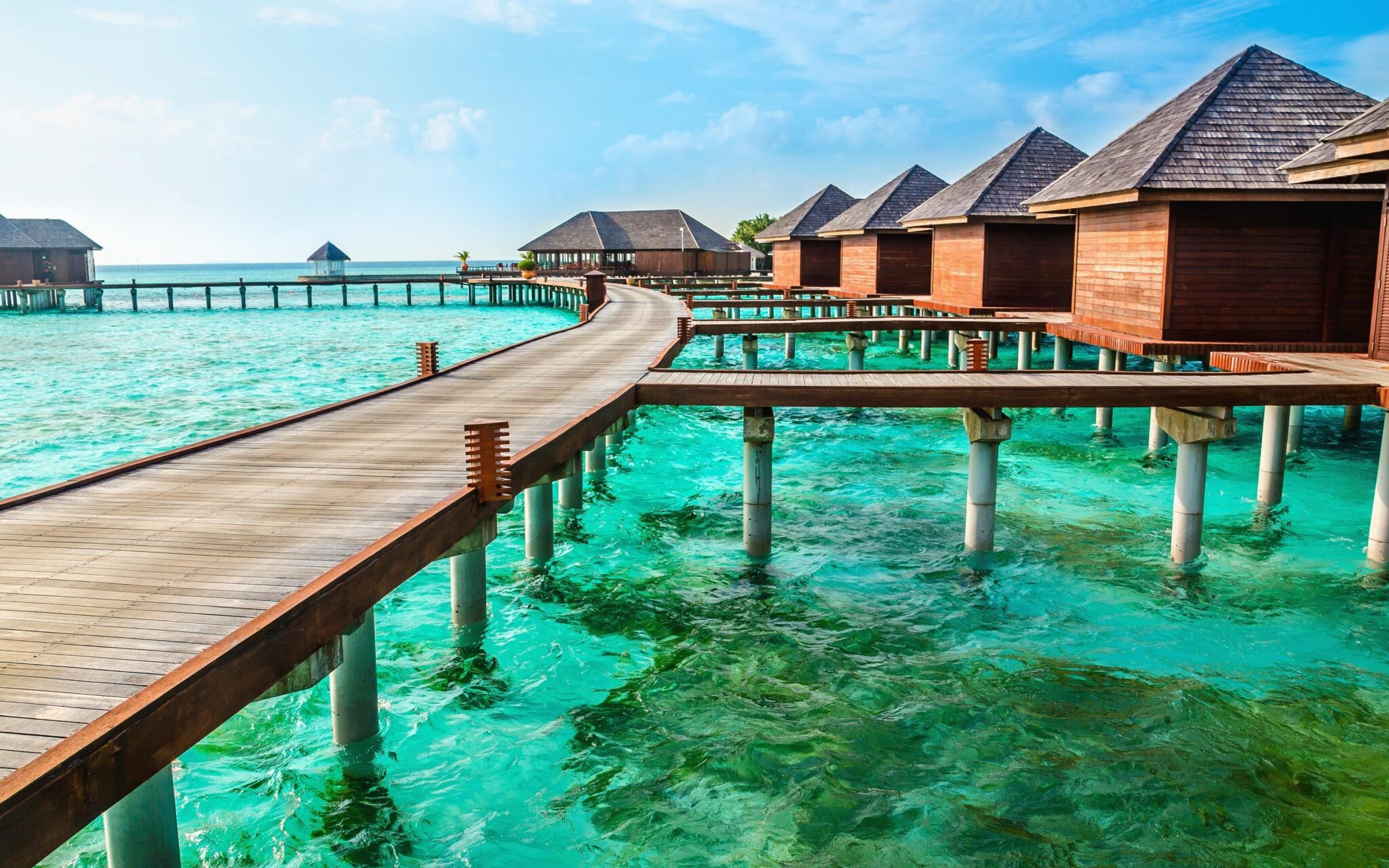 Lakshadweep, which means a hundred thousand islands, is a union territory and district of India. The island group consists of 36 islands, including 12 atolls, three reefs, five sunk banks, and ten populated other islands.

Kavaratti, the administrative capital of Lakshadweep, is one of the atolls upon which the island endures.

With a total surface area of 32 kilometers, the islands are the smallest union territory of India. It is around 400 kilometers from the western coast of India. These islands fall on the north side of the Lakshadweep–Maldives–Chagos group of islands.

When Muslims arrived in the seventh century, they established Islam here. Chola dynasty and the Kingdom of Cannanore ruled this region during the ancient period.

Later, the Portuguese arrived and got expelled. The aboriginal people here are Muslims, mostly belonging to the Shafi school of the Sunni sect.

The islands of Andrott, Kavaratti, Minicoy, and Amini have the most condensed population. Most people of these islands are the descendants of the migrants from the Malabar coast.

According to the 2011 Indian census, the population of these islands was 64,473. As Kerala being the nearest state, the islanders are likewise principled to the Malayali people. Their genetic signatures come from the people of Maldives, Sri Lanka, and India.

While some of the population speaks Hindi here, Malayalam with Mahl is the most spoken language in Minicoy island. During British rule, Malayalm was made the official language of Lakshadweep. Malayalam serves as a bridge of communication between Minicoy Island.

The people of Lakshadweep preserve their ethnicity by upholding their religious festivals. Moulood, one of the religious services, lets the islanders extend prayers to the divine power and eat together.

Ratheeb is another unique event that began in the Kavaratti, where people of the island praises Sheikh Kasim, one of the honored saints, and collects his blessings. Lakshadweep archipelago is one of the four coral reef regions in India.

Since 1974, Lakshadweep is recognized as a tourist interest for Indians because of its corals, which brings in significant revenue.

Bangaram and Kadmat islands are projected to become major destinations for international tourism since such a small region cannot sustain industries.

The average temperature here ranges from 27° C – 32° C with an annual rainfall of 150 centimeters.

The lack of civilization and the profusion of flora and fauna make Lakshadweep a paradisiacal place. Coconut copse and marginal shrubs are the most common verdures of this archipelago.

These islands are bird reserves and home to an array of water birds, such as teals, herons, and gulls.

Fishing, coconut fibre extraction, and coconut fibre production are the main livelihood of the islanders. It also contributes to the territory's economy.

The process of drying bonito takes place on Minicoy island. The processed tuna, called Mas, is the popular export product of this territory. Fish-focused food processing is the key industry of Lakshadweep.

Some Amazing Facts about the Lakshadweep Islands:

Here is a list of some cool and unusual facts that one must know about Lakshadweep islands:

The history of the Lakshadweep archipelago is implicit, having no mention but derived from legends. Due to local traditions and Muslim activities, during the rule of the last king of Kerala, Cheraman Perumal, the island marked its first settlement.

The king adopted Islam and decided to quietly depart from his capital, Cranganore (presently Kodungallor).

It is believed that the king's boat got wrecked on Bangaram Island. Nearby Bangaram, they took a safety in the islands of Agatti and returned to the mainland when the weather improved.

They saw other islands on the way where another group of sailors occupied the Amini after they moved and settled there.

The people sent were said to be Hindus, and Hinduism still is in these islands despite Islam.

According to a belief, at first, Amini, Andrott, Kavaratti, and Kalpeni were occupied by small settlements, and later people slowly rolled to other islands like Agatti, Chetlat, Kiltan, and Kadmat.

The hallmark of the history of these islands ensues with Portuguese invaders. It was at that time when the islands got plundered, and the vessels got looted.

In the early 16th century, The Portuguese coercively landed on the island of Amini to obtain coir and were poisoned by the people of the island.

The whole island got converted into Islam, but the Hindu Raja of Chirakkal had authority over the island shortly, which later went to the Muslims in the mid 16th century.

The rule of Akkarals was severe and unendurable, so the settlers from Agati attended Tipu Sultan at Mangalore in 1783 and requested him to take over the Administration of Amini.

Tipu Sultan having cordial relations with Beebi of Arakkal was given the authority of Amini after discussions. Tipu Sultan ruled the five divided islands, and the Arakkal house dominated the rest.

After the battle of Seringapattom, the islands got occupied by the British East India Company. To reinforce their own political and economic benefits, the British misused the profits from these islands.

When the British came up with the Lakshadweep Regulation 1912, half of the legal and commanding power of Amins or Karanis of the islands got dissolved.

The regulation restricted the entrance of outsiders. The more polished side of the colonial rule was that it established few dispensaries and 9 Primary Schools in the islands.

1. What are the five main features of Lakshadweep?

1. It is the smallest union territory of India, with a square surface of 32 kilometers.

3. Kavaratti island is the capital of the Lakshadweep islands.

4. It is composed of small coral islands which attract tourists.

5. It has a tropical climate.

2. For what is Lakshadweep famous?

It is famous for its beach destination, crystal cerulean water, coral reefs, sea adventures, and seafood.

3. What are the main industries of Lakshadweep?

4. How were the Lakshadweep islands formed?

The Lakshadweep islands are formed by the gathering of corals due to volcanic eruptions.

5. Who governs the Lakshadweep islands?

The Indian national constitution determines the government structure of Lakshadweep. The President of India appoints an administrator who administers the territory.

Dinesh Sharma IPS is the present administrator of the Lakshadweep islands. The jurisdiction of this territory falls under Kerala High Court.

6. What are the places to visit in Lakshadweep?

Lakshadweep is known for its natural pleasure, and some of the following places must be on your list:

1.   Bangaram Island: The only island that permits ALCOHOL. This island is quiet and notices the presence of only hotels and some crazy sea adventurous folks. If you are a deep-sea fanatic, this is your chance to explore the world of sharks, sea turtles, and eels.

2.   Agatti Island: This island is like a glint of light. No wonder this is the most beautiful island surrounded by coral reefs. Discover the Mohiyudeen Mosque and give yourself an adventurous session of snorkeling and a glass-bottomed boat ride.

3.   Kadmat Island: The crystal clear water and corals all around makes this island more astonishing. It has a coir factory which produces handmade as well as machine-made coir.

4.   Kavaratti Island: The capital of Lakshadweep and the busiest island where you can give your shot at diving. Important visits include Ujra Mosque and Aquarium-cum-Museum.